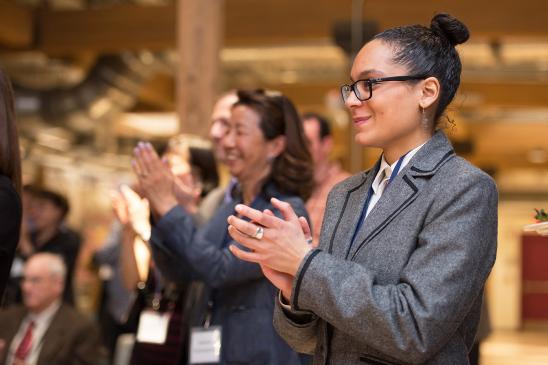 The ExCollege continually seeks input from alumni, both recent graduates and those who are established in their fields, to keep the ExCollege at the forefront of innovative, participatory learning. This group of dedicated alumni meets with the ExCollege director and staff twice a year.

Kate Drizos Cavell (A'06)
In her undergraduate years Kate served as a student worker in the ExCollege, and she liked the job so much that she's worked at a university ever since! She is currently the Assistant Director of Student Affairs at The Fletcher School, where she works with graduate students and student organizations. She is also a PhD student at Boston College's Lynch School of Education. In Fall 2018 she taught an ExCollege course titled Deconstructing the Ivory Tower: A Critical Perspective on Universities about the history of American higher education.

Bruce Cohen (A'83)
Bruce is a Senior Managing Partner at Cortland and the company's investments strategist. He has thirty years of experience in real estate investment, and previously was the founder and Chief Executive Officer of Wrightwood Financial. He is a longstanding "senior advisor" to the ExCollege, and a proud parent to a recent Tufts graduate. Fun fact: Bruce is a self-described boxing fanatic. He lives in Chicago.

Jonathan Goldner (A'99)
Jonathan is a digital product manager at Viacom in New York. His proudest achievements at Tufts were teaching an ExCollege course and accidentally getting the Communications minor requirements changed for future undergrads. His more recent achievements include a son. His wife puts up with a lot.

Lynn Muster (J'90)
Lynn is a senior staff attorney for the Massachusetts Appeals Court. Lynn found her niche at Tufts when she enrolled in a women's studies course at the ExCollege. During her junior year, she designed and led a first-year Explorations class on political cultures of the US and Soviet Union. She has remained close to former ExCollege Director Robyn Gittleman and her husband Sol, Tufts' former provost and Lynn's professor for a Yiddish literature course.

Marcy Regalado (A'15)
Marcy graduated with a BS in Engineering Psychology (Human Factors Engineering), and was involved with the ExCollege as an Office Assistant, Board member, Explorations leader, and key player on the ExCollege softball team. She also played as a full back and first team president on the Tufts Women's Rugby Team (Div. II). In addition to her activism with the Group of Six, and as a Latino representative on the TCU Senate, Marcy was a finalist in the Tufts 100K for an iOS app she developed. After graduation she worked as a UX Designer + Architect at Fidelity Investments, where she led the design and implementation of innovative features for the company's website, mobile apps, and wearables. Currently she is pursuing an MS in Engineering for Design Impact at Stanford University.

Grace Segers (A'17)
Grace is a reporter for CBS News, where she writes about national politics for the CBS News website. She was previously a local reporter in New York City for the magazine City & State New York. If not for her terrible eyesight and hand tremor, she would be a fighter pilot-turned-astronaut on the front lines of the Space Force. While at Tufts she was involved in the ExCollege as a Board member, Perspectives Leader, and Office Assistant. She lives in Washington, D.C.

Michael Wang (A'99)
Michael is a Partner at Impact for Education, which engages philanthropists in systemic change in public education. Prior to that, Mike founded Leveraged Impact, a mission-driven consulting practice working with philanthropists to deepen their impact. Mike has worked in leading nonprofits and public policy for twenty years, including as senior vice president at Teach For America and executive director of its Mid-Atlantic region. After graduating from Tufts, Mike taught high school in Louisiana where he also served as education policy adviser to the governor. He lives in Philadelphia.

Nick Woolf (A'14, G'20)
Nick is a professional learning manager at Panorama Education, an educational technology company in Boston that helps districts measure students' social-emotional competencies. After taking five Experimental College courses as an undergraduate student, Nick went on to work as a Product Manager for five years at a technology firm in Cambridge before returning to Tufts in 2018 to pursue a master's in child studies and human development.